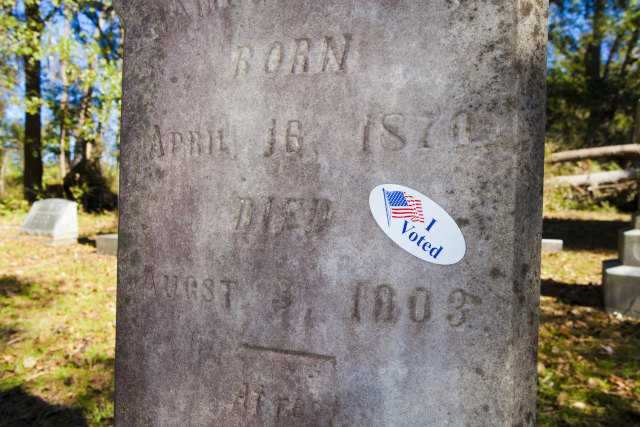 It should be a pretty big red flag that Benson is attempting to maintain out-of-date, defunct voter rolls for future elections.

The court also dismissed motions to intervene from leftist groups, such as the A. Philip Randolph Institute, the Michigan Alliance for Retired Americans, and Rise, Inc. Of course these groups also want to ensure that as many dead residents are left on the voter rolls as possible so that as many bogus ballots get sent out as possible that can be filled out in favor of Democrats.

In 2020, PILF had informed the Secretary of State’s office about the dead registrants on the state’s voter rolls but Benson did nothing. In November 2021, the nonprofit organization filed a lawsuit against Benson for her failure to take action and remove the 25,975 deceased registrants from the rolls.

That’s no small number. Here are some facts according to PILF’s analysis of the dead registrants:

-23,663 registrants have been dead for five years or more

-17,479 registrants have been dead for at least a decade

PILF’s lawsuit argues that Benson has violated Section 8 of the National Voter Registration Act of 1993 by refusing to clean up Michigan’s voter rolls. The law requires officials to “conduct a general program that makes a reasonable effort to remove the names of ineligible voters from the official lists of eligible voters.”

In addition, Michigan is also a member of ERIC, a voter-roll maintenance organization that claims to clean state voter rolls. In other words, the deceased registrants should have been removed by now.

“We should not have to sue Secretary of State Benson to get her to do her job,” PILF spokeswoman Lauren Bowman told The Federalist.

Benson made a national name for herself after the 2020 election when she became the face of election corruption in Michigan. In June of 2020, the Michigan Freedom Fund sued Benson and 16 county clerks for neglecting to maintain accurate voter records.

She also inflated Michigan’s voter rolls by sending out automatic voter registration forms to all eligible citizens in September 2020. As a result of the mailer, 114,000 were added to the state’s voter rolls.

“It is astonishing that Secretary Benson is so vigorously opposing effective list maintenance,” PILF President Christian Adams said in a press release regarding the lawsuit. “It’s remarkable that after sharing this data with the Secretary of State in 2020, dead registrants remained on the state’s voter rolls. This initial win is the first step to ensuring that deceased registrants are not receiving ballots and reducing the opportunity for fraud in Michigan’s elections.”

It truly is astonishing that the so-called Secretary of State is so vehemently opposed to cleaning up the state’s voter rolls and ensuring election integrity. It’s clear she does not want fair and free elections and furthermore should be ousted from office for blatant dereliction of duty.

Michigan is far from the only state with voter roll issues. Last year, PILF won a similar lawsuit in Pennsylvania to remove over 21,000 dead registrants from its rolls.

Of course, Pennsylvania and Michigan are two of the highly contested states from the 2020 election where there are far more questions than answers. Shame on the state executives for being so unwilling to take action to ensure election integrity.