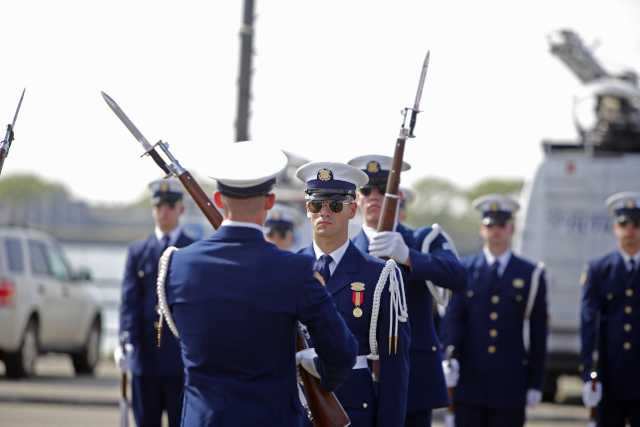 (Republican Party News) – A new report from Just the News has revealed that cadets attending the Coast Guard Academy who are seeking religious exemptions from the oppressive COVID-19 vaccine mandate being enforced by the U.S. military have been ordered (screenshot here) to leave the campus within 24 hours of receiving the notice of final military adjudication of their cases. However, these individuals were not provided any further details regarding what their future in the armed forces might be.

And the radical left in the federal government is wondering why in the world our nation is experiencing a crisis in military recruitment? Really? It probably has something to do with the government attempting to force individuals to give up their bodily autonomy in order to take a very much still experimental vaccine, though I’m not an expert or anything.

“Much like the West Point cadets whose appeals of religious accommodation requests (RAR) for exemption were denied, the Coast Guard cadets were afforded barely any time to adjust to the final military adjudication of their cases,” the report from Just the News said.

“The cadets’ RAR appeals were denied in May. In June, the Coast Guard Academy notified the unvaccinated cadets that they would be disenrolled. The cadets appealed the disenrollment, but the academy didn’t reject the appeals until Aug. 15. The academy didn’t notify the cadets of its decision until Aug. 18, three days later, when it ordered them to leave by Aug. 19, the following afternoon,” the report continued.

When folks who are serving in the military are denied their RARs for vaccine mandates, they have the right to appeal the rejections. If the appeals they file are then denied, the military will start the process of removing these individuals from the military.

Just one day after receiving the notification that they are to leave, the seven Coast Guard cadets then packed up all of their stuff and scrambled to find a way to get themselves and all of their things back to their homes before the deadline expired, according to one cadet who spoke to Just the News on Monday.

“The cadets are still enrolled in the academy and receive pay — which the cadet said is like ‘pennies,’ anyway — as they’re on temporary duty at their home addresses. Thus, they are required to attend their military trainings online, despite being unable to attend classes that started on Aug. 22,” the report stated.

What makes the situation these cadets find themselves in even more difficult is that they haven’t been totally disenrolled just yet, which means they are not allowed to leave the Coast Guard in order to seek out new employment or get an education. The same cadet who spoke with Just the News stated that it’s now too late to transfer to another college at this particular point in the semester and not all of the military academy credits transfer over.

“The academy hasn’t told the cadets what the next steps are for disenrollment or when they will occur. Even if the academy lets them back, they have already fallen behind in their classes, according to the cadet,” the report from Just the News stated.

“Two of the unvaccinated cadets being forced to leave the academy’s campus are seniors, one is a junior, and four are sophomores. All of the freshman cadets were required to be vaccinated, as those who were unvaccinated were weeded out during boot camp this summer, the cadet told Just the News,” the report said.

The cadet then stated that the Coast Guard Academy is kicking out unvaccinated cadets due to their religious beliefs. The cadet then remarked that all of the individuals were exemplary in both their academic work and their physical abilities.

“The cadet mentioned that a protected stay order in Clements v. Austin, a class action lawsuit against the vaccine mandate, allows the unvaccinated cadets to be enrolled at the academy through Sept. 1. However, after that date, the academy can disenroll them. The attorneys representing the cadets are requesting a temporary restraining order against the vaccine mandate for the length of the lawsuit,” Just the News reported.

The cadet then revealed that the academy is arguing that they aren’t guilty of violating the protected stay order due to the fact they have not disenrolled the cadets over their refusal to take the vaccine. Isn’t it awful how badly this government is treating those who have volunteered to serve our country?

Again, how can they possibly be confused about why the military is experiencing low recruitment numbers? It makes perfect sense that folks would not want to join the armed forces. The very purpose many have for wanting to be part of the military is to fight and preserve the rights and way of life that we as Americans often take for granted on a daily basis. When you trash those rights and try to force volunteers to receive a medical treatment or vaccine against their will, you’re naturally going to lose people.

“The lawyers for the cadets argue that the academy is violating the order because the purpose of it was to ensure they still received their education, the cadet said,” the report said. “The lawsuit focuses on the COVID vaccine being under emergency use authorization (EUA), not full approval from the U.S. Food and Drug Administration. The military can only legally force the fully approved vaccine on service members.”

A report from a whistleblower to Congress alleged just last week that the Comirnaty vaccine currently popping up at Coast Guard clinics isn’t actually Comirnaty vaccine that has been given full approval by the Food and Drug Administration. In fact, it might turn out to be a mislabeled vaccine under the EUA.

“The cadet who spoke to Just the News said that in a recorded phone call with Pfizer, they and another cadet were told by the pharmaceutical company that FDA-approved vaccines aren’t being administered to anyone. This contradicted Coast Guard claims that the Comirnaty vials at their clinics were the real, fully-approved vaccine,” the report said.

The cadet continued talking with Just the News, going on to say that all they want to do is just keep getting a good, quality education at the Coast Guard Academy. The person stated they had chosen to serve their country in order to repay it for the many blessings it had provided for them and their family.

Continuing the conversation, the cadet said that one of the reasons they joined the service was because they were a huge proponent of the First Amendment and wanted to protect that right, which is more than just freedom of speech, but freedom of religion as well. However, now the armed forces are striking back against those exercising their liberty in the military by refusing to take an experimental vaccine.

R. Davis Younts, an attorney for the military, also spoke with Just the News, going on to say, “The steps taken by the Coast Guard Academy are clear religious discrimination against Christians and reflect a total disdain for the faith and constitutional rights of cadets.”

Younts then said, “The actions of the Coast Guard continue to have a devastating impact on morale and military readiness. Worse, these actions appear to be based on a lack of moral courage among the leaders of the Coast Guard. With the new CDC guidance, there is simply no medical or scientific justification for treating young men and women who have worked so hard to earn a commission like pariahs.”

What kind of message does this send to those who have volunteered to serve and protect their country? It says those that volunteer for the armed forces sign away their personhood and bodily autonomy, making themselves enslaved to the state. Any refusal to comply will be met with harsh consequences.

That’s not what military service used to look like.