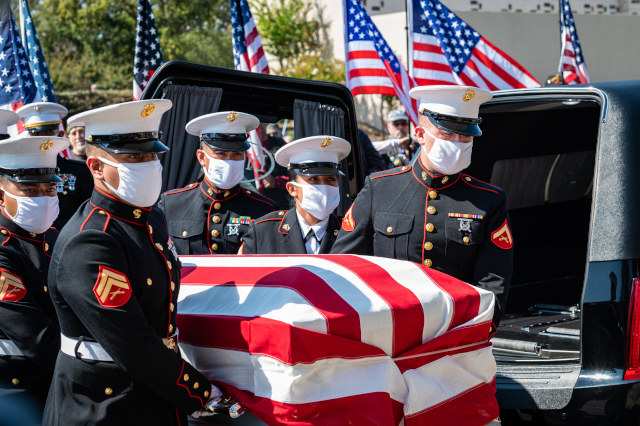 (Republican Party News) – Well, it looks like liberal wackadoo actor Alec Baldwin, the same guy who carelessly handled a firearm on the set of a movie and ended up killing the cinematographer, has once again allowed his hot-headed temper and loudmouth get him in trouble. The Gold star family of a Marine who died during the disastrous troop withdrawal from Afghanistan under the leadership of Joe Biden, is now suing the Hollywood star for $25 million.

According to the Washington Examiner, the suit has been filed on behalf of the widow and family of Marine Lance Cpl. Rylee McCollum in the Southern District of New York. The suit makes allegations that actions taken in the wake of McCollum’s death by Baldwin opened them up to a bunch of online attacks and a ton of hate.

Baldwin is specifically being accused of spreading the notion that one of McCollum’s sisters, Roice, was an “insurrectionist” that participated in the Jan. 6 riot that took place at the Capitol building over a year and a half ago.

One thing is for sure. The Trump Derangement Syndrome that leftists have suffered from ever since the billionaire was elected president back in 2016 really exploded in the wake of the riot. Ever since then, these folks have been desperately attempting to paint up every single Trump supporter as some kind of wild domestic terrorist who is hellbent on overthrowing the government.

“Baldwin had initially gifted Roice a $5,000 check to be given to the Marine’s widow, Jiennah, and her newborn child, the lawsuit reads,” the lawsuit goes on to say, according to the Washington Examiner report. “However, in January 2022, the relationship turned sour when Roice posted a photo of her protesting in Washington, D.C., the day of the Capitol riot.”

“Are you the same woman I sent the $ for your sister’s husband who was killed during the Afghanistan exit?” Baldwin wrote as a comment on the post.

“When I sent the $ for your late brother, out of real respect for his service to this country, I didn’t know you were a January 6th rioter,” he then wrote to the woman, the suit states.

“Protesting is perfectly legal in the country and I’ve already had my sit down with the FBI,” Roice fired back. “Thanks, have a nice day!”

“I don’t think so,” Baldwin, once again showing his liberal lunacy, shot back. “Your activities resulted in the unlawful destruction of government property, the death of a law enforcement officer, an assault on the certification of the presidential election. I reposted your photo. Good luck.”

The actor publicly slammed Roice and referred to her as an “insurrectionist,” the suit claims. It goes on to say that Baldwin’s “seemingly benevolent overtures turned into a nightmare.”

Not long after Baldwin’s actions, Roice began to receive what she called “hostile, aggressive, hateful messages” online. But not only did Baldwin call Roice an insurrectionist, he also mistakenly referred to Jiennah as one as well, according to the lawsuit.

“As a result of Baldwin’s actions, Jiennah, Roice, and her sister Cheyenne were subject to online harassment and mistreatment, according to the lawsuit. They were called white supremacists and likened to Nazis, the suit reads,” the Washington Examiner reported.

“Baldwin’s conduct was negligent and reckless as he should have known that making the allegations he did against Plaintiffs to his millions of followers would cause Plaintiffs harm,” the suit later says.

The Gold Star family had previously attempted to sue Baldwin in the state of Wyoming, but the case was tossed out due the court there claiming they had no jurisdiction over Baldwin.

McCollum, who was only 20 years old, was one of the 13 service members killed in a suicide bombing that took place near Hamid Karzai International Airport on Aug. 26, 2021. He’d still be alive today if Biden hadn’t tried to appease his voter base by taking careless action that was not supported by quite a few folks who provided advice to him on the matter.

And while this family was still in the throes of grief over their loss, Baldwin, a classless liberal pawn, added sorrow upon sorrow to their suffering by drawing vile, twisted Internet trolls down on the hero’s surviving family members. Appalling.