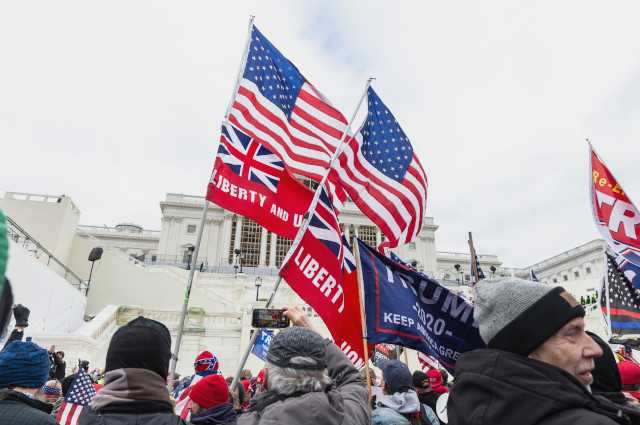 (Republican Party News) – Back during the chaotic events of Jan. 6, 2021, Dr. Simone Gold walked into the Capitol building and gave a speech. After delivering her talk, she left the building. Now she is being subsequently charged for this action. The whole thing with J6 is clearly to transform normal American citizens who showed up to protest what they believe was a stolen election, into radical homegrown terrorists that all of America should fear. The narrative we’ve been spun is that these individuals were planning some sort of coup, an attempt to overthrow the government, when that is not true at all.

According to BizPacReview, Gold pleaded guilty in March to a charge of remaining in a restricted building or grounds, which is a class A misdemeanor. Three months later, a judge — who was appointed by former president Barack Obama — handed Gold a sentence of 60-days in jail, along with another 12 months of supervised release. He wasn’t done there, either. The judge slapped the doctor with a whopping $9,500 fine.

“Now fast-forward to Friday, Sept. 9th, when Gold finally made her way out of jail, only to be greeted by Rep. Louie Gohmert, who’d traveled all the way to the jail to welcome her back to society and hand her a special gift,” the report said.

“Rep. Louie Gohmert (TX-01) joined Dr. Simone Gold today as she was released from federal prison after she was unjustly prosecuted by the Biden Administration’s Department of Justice,” according to a press release that was put out by the congressman’s office.

I am honored to receive this recognition from Congressman Gohmert, a true believer in freedom and a fierce defender of our constitutional rights.

Heartfelt moments as Dr. Simone Gold has officially been released from prison, being met by Representative Louie Gohmert, the AFLDS team, and her supporters.

We can never allow this miscarriage of justice to happen again. pic.twitter.com/zh2O4S1wGY

The press release also revealed, “He also presented her with a flag which was flown over the U.S. Capitol to celebrate her invaluable work and contributions to public health, medical freedom and our God-given constitutional rights.”

The congressman went on to heap praise on Gold for everything she has done. Gold is the founder of America’s Frontline Doctors, which is a grassroots organization with ties to the Tea Party Patriots, that was created during the thick of the coronavirus pandemic in order to help combat the insane restrictions that were being employed by governors — more like tyrants-in-training — and to also provide worker for doctors who were being persecuted for their beliefs concerning the COVID virus and subsequent vaccine.

“Dr. Gold is a patriot and an American hero. In the early days of the COVID-19 pandemic, she exposed the world to life-saving early treatment options that undoubtedly saved many lives. Tragically, her sound medical advice was viciously attacked and suppressed by a corrupt media captured by pharmaceutical companies with a clear financial agenda,” Gohmert went on to say about the doctor.

“After having her name and reputation shamefully dragged through the mud, the Biden administration’s DOJ threw her in prison for peacefully walking into the U.S. Capitol on January 6 and delivering a speech. Dr. Gold is the definition of what a political prisoner looks like—something I never thought I’d see here in the United States of America,” Gohmert continued.

He finished his statement by saying, “God Bless Dr. Gold. History will not look kindly upon those who persecuted—and prosecuted—doctors who spoke out against the COVID lockdown, mask and vaccine mandates.”

Happy Freedom Day to @drsimonegold! I'm honored to be here with you after some vindictive DOJ personnel decided to lock you down in a MAXIMUM SECURITY prison.

YOU are a national treasure! pic.twitter.com/4l7LMBUjI8

Dr. Simone Gold has been released and has a message for you!#FreedomIsGOLD pic.twitter.com/Ft8Jf8qQsa

Gold has maintained ever since the incident on J6 occurred, she is a victim of what she calls “political persecution.” This particular belief did a lot of damage to her in court.

“Sitting here today, I don’t think you have truly accepted responsibility,” U.S. District Court Judge Christopher R. Cooper went on to say during her sentencing in June, as reported on by MedPage Today.

“Your organization has used your notoriety to raise money to garner support for you in connection with the sentencing and for its general operations by mischaracterizing what this proceeding is all about … telling your supporters that this is a political prosecution of a law-abiding physician that’s designed to threaten and intimidate any American who dares to exercise their First Amendment rights,” the judge continued.

Again, you have an attempt here by the radical left to paint Gold and others like her up to be some sort of terrorist for what she did, despite the fact that she was simply fighting against tyranny. Had the doctor been a member or supporter of Black Lives Matter and actually participated in the riots that went on for over a year after the death of George Floyd, she would be hailed as a hero by the media and the court system and allowed to go about her business and live her life.

The double standard is atrocious.

The judge then pushed back against Gold’s claim that she’d just been a peaceful bystander and not a violent rioter.

“It is obvious from the video that we watched today that you were part of an angry and aggressive, I would say mob, crowd of people intent on getting past law enforcement and entering the East Rotunda through those doors. Regardless of how the door got opened, the police were obviously trying to keep people out,” he went on to say, scolding the doctor.

Again, I ask, if this is the standard, why was it not applied to BLM and Antifa members who burned down businesses, stole things from stores, and wrought havoc down on whole sections of major U.S. cities? This is a blatant injustice and it is infuriating.

Gold has rejected this characterization. Those who support her do too, which happens to include conservative firebrand Rep. Marjorie Taylor Greene.

Dr. Simone Gold has been in maximum prison since July 26th for walking around in the Capitol.

She walked in open doors on Jan 6th gave a speech & left.

She treated MANY people including MOC for covid.

The things happening in this country are unreal and must end.

It is good news that political prisoner Dr Simone Gold has been released early, but she should never have been sent to jail. https://t.co/ziTjIkxtl1

60 days in jail for trespassing.