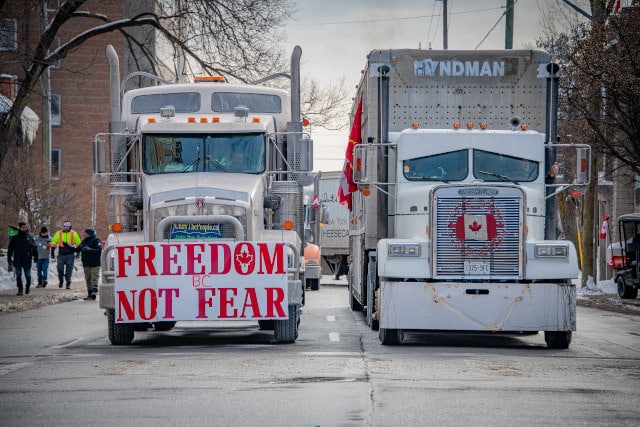 (Republican Party News) – According to WND, a woman who recently donated to the Freedom Convoy, a group of truckers and individuals who are protesting against Canada’s vaccine mandates and other COVID restrictions, was forced to close down her gelato store after someone hacked into crowdfunding site GiveSendGo and leaked her information.

“Tammy Giuliani, owner of Stella Luna Gelato Café in Ottawa, Ontario, said in an interview with the Ottawa Citizen that she was forced to close down her store after she began receiving threats. Giuliani’s name appears on a list of Freedom Convoy donors stolen from crowdfunding site GiveSendGo on Sunday and published online, the Daily Caller News Foundation confirmed,” WND’s report says.

Giuliani then said she told her staff to go home out of concern for their own safety and immediately reported the threats she received to the police. She then confirmed to the Ottawa Citizen that she made a $250 donation to the Freedom Convoy on February 5, stating she was inspired by the protesters’ goal of easing up the COVID-19 restrictions.

“When a group of people first decided they were going to travel across the country to spread this message of solidarity, it seemed like a beacon of hope for small businesses like us,” she stated during her chat with the Ottawa Citizen. “It’s no surprise that small businesses have been on the edge. Families are at risk of losing their livelihood. I’m a sucker for a grassroots cause.”

But as the protest became more disruptive, Giuliani says that she regretted her decision of donating the money to the protest effort. She did not respond to requests from the Daily Caller for a comment.

Things have been getting worse and worse in Canada, which is why this protest is happening in the first place. Unfortunately, rather than listen to the concerns of the people and address those issues, leadership in the country has decided to go full on tyrannical in its response to the protest.

According to Infowars, Prime Minister Justin Trudeau has now invoked “terrorism” laws that will allow the government to seize bank accounts and cryptocurrency belonging to supporters of the Freedom Convoy.

“By invoking the Canada Emergencies Act for the first time ever, Trudeau gave his government carte blanche to use every available method possible to stop the ‘terrorist’ Freedom Convoy, including calling upon banks to freeze and seize their finances without a court order,” the report says.

“Deputy Prime Minister and Minister of Finance Chrystia Freeland announced that these new emergency powers will include expanding ‘Terrorist Financing’ rules to target crowdfunding efforts that have been supporting the Freedom Convoy,” the report continues.

“First we are broadening the scope of Canada’s anti-money laundering and terrorist financing rules so they include crowdfunding platforms and the payment service providers they use,” Freeland went on to say during Trudeau’s press conference.

“These changes cover all forms of transactions, including digital assets such as cryptocurrencies,” she added. “The illegal blockades have highlighted the fact that crowdfunding platforms and some of the payment service providers they use are not fully captured under the proceeds of the Crime and Terrorist Financing Act.”

“As of today, a bank or other financial service provider will be able to immediately freeze or suspend an account without a court order. In doing so, they will be protected against civil liability for actions taken in good faith,” she continued.

She then warned the truckers and their supporters, “We are today serving notice: if your truck is being used in these illegal blockades, your corporate accounts will be frozen. The insurance on your vehicle will be suspended.”