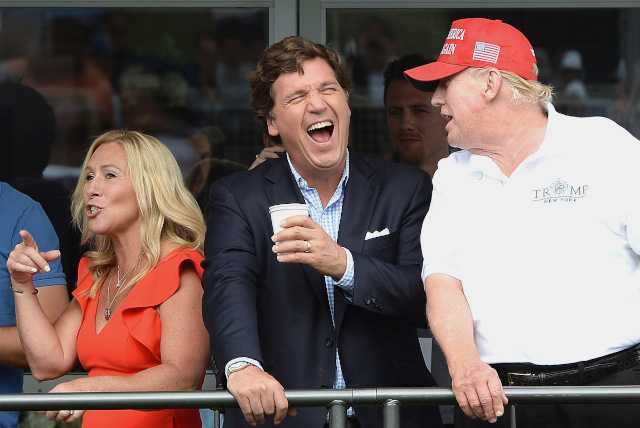 Sometimes it’s hard to tell if these celebrities actually believe the nonsense they spew or if they’re deliberately pushing leftist propaganda. Either way, it’s best to take their words and sentiments with a grain of salt.

Unfortunately, too many Americans actually believe these unhinged elites who live in their privileged Hollywood bubble completely and totally removed from everyday Americans.

Some of these celebs are far more radical than others, like actress Jennifer Lawrence. She’s as far left as they come. She’s so far left she’s admitted to having recurring “nightmares” involving Fox News’ host Tucker Carlson.

Lawrence made the comments during an interview with Vogue that was released Tuesday.

“She even discussed with her therapist the recurring nightmares she has about Tucker Carlson,” Vogue magazine writer Abby Aguirre wrote in a lengthy profile for the magazine’s October issue.

According to Lawrence, her nightmares featuring Carlson stem from being raised by a conservative family in Kentucky and their traumatizing support of President Trump and the fact that they dare to watch Fox News.

“I just worked so hard in the last five years to forgive my dad and my family and try to understand: It’s different. The information they are getting is different. Their life is different,” Lawrence told Aguirre, who dramatically noted the “haunted look in her eyes.”

She then lamented that she failed in forgiving her family for being conservatives with minds of their own before spewing extreme leftist rhetoric.

“I’ve tried to get over it and I really can’t. I can’t. I’m sorry I’m just unleashing, but I can’t f—- with people who aren’t political anymore. You live in the United States of America. You have to be political. It’s too dire. Politics are killing people,” the unhinged actress said.

The fact that Jennifer Lawrence has nightmares of Tucker Carlson but not Harvey Weinstein tells you everything you need to know about Hollywood. 🥴 pic.twitter.com/fl5qNrVjZf

Tucker Carlson reacts to Jennifer Lawrence saying she has nightmares about him. pic.twitter.com/7fpou9nzqV

During the interview Lawrence explained how she just couldn’t understand how Americans could vote for Trump, whom she comically referred to as “dangerous,” especially over Hillary Clinton.

“It breaks my heart because America had the choice between a woman and a dangerous, dangerous jar of mayonnaise. And they were like, ‘Well, we can’t have a woman. Let’s go with the jar of mayonnaise,’” she said.

She then went on to push more leftist rhetoric and propaganda, saying that the issues she has with her family are common today, especially after the SCOTUS decision overturning Roe v Wade, because, you know, women aren’t equal to men.

“I don’t want to disparage my family, but I know that a lot of people are in a similar position with their families. How could you raise a daughter from birth and believe that she doesn’t deserve equality? How?” she lamented.

For not wanting to disparage her family, she did a pretty good job.

Lawrence’s conservative family likely does not actually believe that women don’t “deserve equality” but this is the typical leftist mentality. It’s done nothing but cause division and discord and it’s all just in their deluded minds.