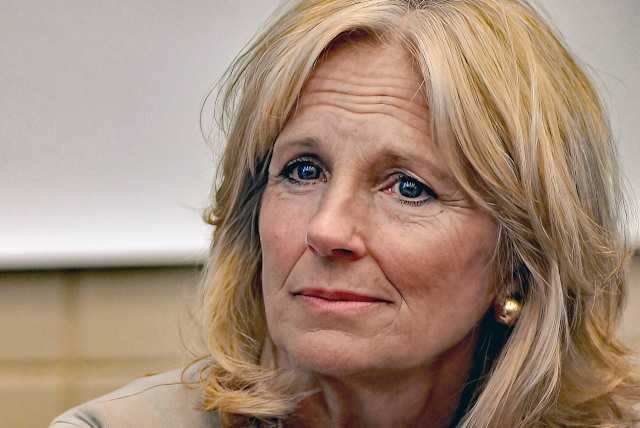 (Republican Party News) – As first lady Jill Biden took an opportunity to deliver a talk during a fundraising event over the weekend for the Democratic National Committee, which was held in the very deep blue stronghold of Massachusetts, she likely hoped that a friendly audience would be receive the story she was going to tell concerning the struggles of the Biden presidency up to this point.

Instead, according to The Western Journal, Biden ended up delivering a horrific speech that only provided even more proof that her husband’s worst critics are absolutely right about him.

Talk about failure of biblical proportions. It seems like everything this administration touches turns to absolute garbage.

“[The President] had so many hopes and plans for things he wanted to do, but every time you turned around, he had to address the problems of the moment,” Biden went on to say to a group of close to two dozen donors at a private home on the island of Nantucket, according to a report from CNN.

Gee, how tragic, right? A president actually having to do his job and address the important issues that are having a direct influence on his constituents, which is essentially what his entire job entails? Hogwash! Nonsense!

“He’s just had so many things thrown his way,” the first lady went on to say, according to CNN. “Who would have ever thought about what happened [with the Supreme Court overturning] Roe v Wade? Well, maybe we saw it coming, but still we didn’t believe it. The gun violence in this country is absolutely appalling. We didn’t see the war in Ukraine coming.”

What’s utterly ridiculous is how Jill Biden and so many others within the ranks of the Biden administration think that there was actually a constitutional right to murder pre-born children in this country. There wasn’t. And the radical left held to that majority view for a long, long time.

Roe has led to the deaths of millions of innocent children and was a scourge on constitutional law from the very beginning, a beginning that her husband helped to usher in at the start of his lifelong career.

“Her own husband helped usher in its prominence in Supreme Court nomination fights when he helped lead the Democratic fight to sink Reagan nominee Robert Bork in 1987,” the report said.

“Once now-Justice Amy Coney Barrett was seated to replace the late Justice Ruth Bader Ginsburg, most of the country knew a Supreme Court case rooting out Roe was at least possible,” the Western Journal said.

“And in the case of the Dobbs decision, thanks to a still-unidentified leaker at the court, Democrats had a two-month head start to prepare for the public announcement. But to hear Jill Biden tell it, she and her husband ‘still didn’t believe it,'” the report continued.

Jill, and her presumably her less than fully competent husband, believe gun violence to be “appalling?” Do you guys remember back to all of the violence that unfolded during the summer of 2020 when Black Lives Matter activists and Antifa completely annihilated whole cities, burning down homes and businesses over the death of George Floyd?

Where was Biden then? What was he doing to help reduce the violence and bring the riots to an end? He was too busy napping and slurping down tapioca pudding to care about what was happening in the streets.

And we’re really supposed to believe that these two “didn’t see the war in Ukraine coming?”

“Anyone with access to a newspaper or television — much less the combined might of American intelligence services — could see the war in Ukraine coming for literally months before it started,” the WJ report said.

“And the establishment media might not like to remind the American people of it, but Joe Biden was vice president in 2014, the last time Russian President Vladimir Putin decided to dismember part of Ukraine and invade Crimea. (He no doubt received a harshly worded letter from then-Secretary of State John Kerry.) If the Bidens don’t remember that, maybe they remember Hunter getting a lavishly paid sinecure for the Ukraine energy company Burisma the same year,” the report from WJ stated.

Not only were both of the Bidens in a unique position to see this situation before it happened, but could have taken steps to prevent it from happening. Rather than do that, Biden basically flashed the thumbs up sign in approval of the invasion, essentially allowing Russia to go ahead and slap around his smaller neighbor, so long as he could write it off as a minor incursion.”

But when the tanks were on the move, Putin referred to it as a “special military operation.”

“It was unclear from CNN’s report whether Jill Biden got into the rampant domestic problems plaguing the country on her husband’s watch. For an audience in Nantucket, with an average home value of $3.6 million, ‘inflation’ is probably what happens to a yacht sail in a good wind,” the report said.

However, if you look at the topics covered by CNN, the speech made by the first lady comes across as a truly damning indictment of the current administration rather than a defense of it.

Admitting Not Ready for Prime Time!

Jill Biden said at DNC Fundraiser..
"Joe had so many hopes & plans"

This is literally so funny. Can First Lady Jill Biden please explain to my boss that I had so many hopes and plans for things I wanted to do but every time I turned around there was a problem I had to address https://t.co/jVsGOTnsVs

I have no doubt the President’s job is very challenging, but other president’s had faced tougher challenges and still accomplished things, rather we like the outcome or not. She basically said her husband is unfit to be President.https://t.co/hnwx804Xs9

“The Bidens have spent virtually their entire adult lives in the world of politics and raised their family in the same environment. (They also went two for two on adult offspring with drug problems. Do Democrats want to compare that to former President Donald Trump’s accomplished family?)” the report added.

At the end of the day, this speech is proof that Biden’s administration is just as bad as everyone claims it is. The left is even having a hard time coming up with coherent arguments and narratives to spin the disasters in a positive light.